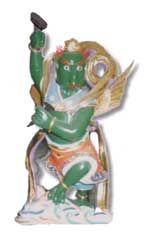 It is believed that a bolt of lightning erupting in the midst of the dark universe disrupts the primordial chaos. Hence at the beginning of time, chaos is altered into order by lightning. Thunder and lightning are worshipped by the primitive because it is one of the greatest forces in the Universe that is feared by man.

In mythology, the Thunder god is in charge of thunder. He is portrayed as having a green face and body, he resembles a bird-like creature his face has a beak. Holds a hammer and chisel, when struck together lightning bolts are released.

He could punish on behalf of Heaven, could strike a vicious person, such as unfilial sons or daughter, able to distinguish between good and evil, and uphold justice.  In Buddhism, he is a Dharma protector.

It is believed his feature derives from the Garuda, a mystical bird-like creature who was the messenger or vehicle of the Hindu god Lord Vishnu. He bears a close resemblance to the Garuda as expounded in Hindu text and Buddhist sutra’s as one of the “Eight class of mystical beings” (天 龍 八 部, Tian Long Ba Bu ).

The Garuda is the arch enemy of the snake, dragon or “naga”, which he feeds on them. Historically, from classical Indian mythology, Garuda is the king of birds.
Slightly fierce, with one face in the form of an eagle, round eyes and a curved beak, Adorned with gold necklaces and bracelets, the lower body is covered with feathers and large wings are unfurled behind. Standing on legs of two talons above coiled snake.

If you were to make a comparative study of the features of the Thunder god and Garuda based on these pictures, you will discover that there is a close resemblance in terms of the features. 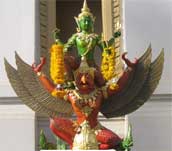 Lord Vishnu and the Garuda