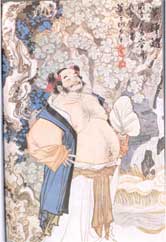 The Chinese character 仙, which signify immortal, is composed of 人 man and 山 a mountain. It denotes the superior class of human spirits, who, having been deified, dwell in remote mountains devoid of human inhabitants. They are imbued with the power of being visible and invisible at pleasure, of raising the dead, of changing stones they touch into gold, and of effecting at pleasure various other wonderful transmutations. The Eight Immortals or Ba Xian (八仙), are legendary beings of the Taoist sect, said to have lived at various times and attained immortality through their cultivation of Taos or nature secret.
Their eminent position has been attained by cultivation, to which eight, including one female (He Xian Gu, 何仙姑) have risen higher than others.

In Taoism, he is known as Zheng Yang Ju Shi, 正陽袓師. Literally, the True Yang First Master. He is the Chief of the Eight Immortals, is said to have lived during the Han dynasty and has possessed the secrets of the elixir of life, and the power of transmutation. He is also known as Zhongli of Han (漢鐘離) because he was born in the Han Dynasty. He is usually depicted as a fat man exposing his bare belly, always grasping his emblem, a fan, which has the magical ability to revive the dead. 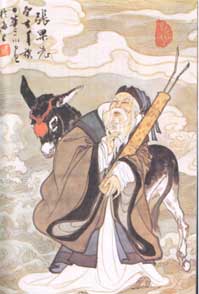 Elder Zhang Guo, lived during the 7th and 8th century AD is a hermit who had spiritual powers of magic, i.e. rendering himself invisible, He is accompanied by a white mule, which carried him immense distances and when not, required was transformed into a paper mule, folded up and put away in his pouch. When he wished to resume his travels, he sprinkles some water upon the paper mule revived it and the mule will appear at once. He generally rode his mule backward. His emblem is the “Yugu” (魚故), a kind of musical instrument in the shape of a bamboo tube or drum with two rods to beat it. 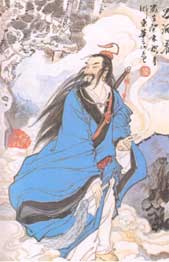 He is the most widely known among the group of deities known as the Eight Immortals and hence considered by some to be the de facto leader. He was born during the Tang Dynasty (AD750). A scholar and ascetic who learned the secrets of Taoism from Zhong LiQuan, the Chief of the Eight Immortals, and attained immortality at the age 50. He is the patron saint of barbers and is also worshipped by the sick. He is generally depicted wearing a scholar clothes and headgear, holds in his right hand a Taoist fly whisk, and his emblem, a sword, which is slung across his back. He is well known of slaying and getting rid of various forms of evil on earth for more than 400 years. 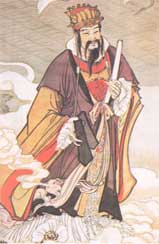 He was born during the Song Dynasty (AD930-999) as the son of a military commander by the name Cao Bin 曹彬, that happens to be the brother of Empress Cao Hou 曹后. He is depicted dressed in official robes, a court headdress and he holds a pair of castanets, which is his emblem. The castanets are said to be derived from the court tablets, authorizing free access to the Imperial Palace, to which he was entitled due to his birth. 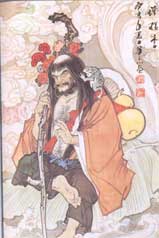 He was born during the Western Zhou period and was originally named Li Yüan. He studied with Lao Tzu (founder of Taoism) and Goddess Hsi Wang Mu. He is said to have devoted 40 years to the practice of meditation and cultivation of Taoist esoteric practice.

Before becoming immortal, he had a pleasant disposition. However, on one occasion his spirit traveled to the celestial realm. He instructs his disciple to wait seven days for his spirit to return, but after six days the student had to return to attend his sick mother, so he created his body assuming that he had deceased.

Upon returning, Li was forced to enter the only body available, the corpse of a homeless beggar who had died of starvation; who unfortunately had “a long and pointed head, blackened face, woolly and disheveled beard and hair, huge eyes, and a lame leg.” His emblem is the pilgrim’s gourd which identifies him as one of the Eight Immortals and his iron crutch. 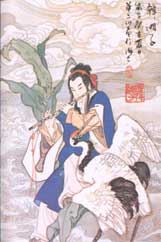 He is the nephew of Han Yu 韓愈, a famous scholar, and statesman who lived during the Tang Dynasty (AD820). He is the disciple of Lu DongBin, he became immortal when he fell into a supernatural peach tree. He has the ability to make flowers grow and blossom instantaneously. His emblem is the flute, and he is the patron of musicians. He wanders around, playing his flute, enticing birds and beast of prey by the sweet melodious sound of his flute. 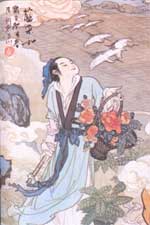 He was from Tang Dynasty. His behavior was out of the norm and known for its bizarreness. He wore only shorts and thin shirts in winter, and thick jacket and long pants in summer. He walked with one foot bare and another with a shoe.
His distinctive emblem is a flower-basket, often carried slung on a hoe over his shoulder. The basket contains various flora associated with ideas of longevity. 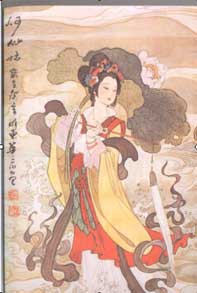 Lived during the 7th century AD, she is the daughter of a shopkeeper of LingLing 零陵, Hunan province in the Tang Dynasty. According to one account at the age of thirteen, she often went to the mountains to collect medicinal herbs. One day, she encountered the Immortal Lu DongBin who gave her a peach and told her, “You shall become immortal is you eat it”. She did as he said, and miraculously she never felt hungry or thirsty, can float and jumped from one cliff to another gathering medicinal herbs to help the sick. In addition, she could predict people’s fortune.  Her emblem is the lotus, which she carries in her hand. And at times she is also depicted holding a fly whisk on the other hand.

Be the first to comment on "The Eight Immortals"