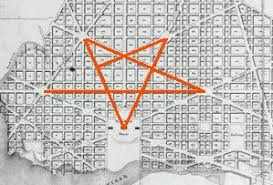 The Pentagram is a five-sided star, usually made with a single continuous line, with the points equally spaced. It is often depicted within a circle. This is one of several geometric star designs representing the mysteries of creation and redemption, the soul of man in its relationship with the Universal Spirit. Magickally, such diagrams are considered efficacious in rites and rituals of evocation and transformation.

The older word ‘pentacle’ has been replaced over time by the less precise ‘pentagram.’ Today, the pentacle refers to an engraved copper disk engraved with a pentagram used by Witches to represent the element earth in the magick circle; this follows Eliphas Levi’s original illustration of the tarot suit of coins, which he called pentacles, as coins engraved with pentagrams.

By the Middle Ages, the pentagram had become a general symbol of spiritual wisdom and truth, and it was marked on doorways and windows to keep evil out of the house. There is evidence that the old village witches made use of the pentagram, which they called the Witches’ Foot.

Lesser Ritual of The Pentagram

One of the most basic and useful ceremonial rituals of magick is called the banishing ritual, or lesser ritual of the pentagram. The banishing ritual is helpful in psychic protection and healing because it forms a protective barrier against evil forces. The psychic barrier it creates can be made to permit entry of desired (constructive) forces and the exclusion of negative ones.

The banishing ritual is an essential first step in almost any formal full magick ceremony. The ritual requires that you use a ceremonial knife, wand to “draw” the pentagram in the air above your head.

Also, you will be chanting (‘vibrating’) Eh-Ei-He.

Holding your magical weapon extend your arm out straight in front of you. In this ritual, you will use the full sweep of your arm to draw the pentagram in the air. Follow the description below by beginning at the lower left and sweeping your magical weapon up toward the right, etc. as shown. Do not bend your arm at the wrist or elbow. While you do this, visualize the lines and eventually the star as vibrant white, floating in the space before you. You are projecting energy to do this, and the result will be a gleaming 5-pointed star floating in the air. Visualize this as vividly as you can. Now you will energize it further by piercing the center of it with your magical weapon and vibrating “Eh-Ei-He”.

One of the primary uses of this ritual is to ward off psychic attack — that is, when another is attempting to harm you, cause sickness, accidents, bad dreams or to force you to do something against your will.

The Mystical Pentagram Technique for Self-Awareness

The Mystical Pentagram is a technique which will enhance psychic self-awareness. Practiced on a daily basis it will produce surprising individual results.

To begin, you will need a table of correspondences such as “777” by Aleister Crowley. Look up the names of the gods and goddesses and pick a name for each element(air, fire, water, earth, spirit) which when chanted ‘feels’ right for you.(if you feel relaxed, comfortable and generally positive you would know that a name would be in tune with my inner self.)

Once you have found the five names you are ready to proceed.

Use the techniques for meditation from “Self Self Hypnosis and Meditation Practical-Handbook”. Visualize the five psychic centers. Memorize their positions so that you become familiar with the positions.

Visualize a brilliant white light forming a circle above your head in the spirit center. Mentally draw a white light pentagram within the circle of light. This should be an invoking pentagram.

Next, see a shaft of white light radiate down through your head stopping at your throat. See a circle of white light begin to form and pulsate. Mentally draw an invoking pentagram within the circle of light and vocally vibrate your chosen name for the air center. Continue to stimulate this center for at least five minutes.

When all of the energy centers have been stimulated, direct the light energy from the spirit center to the earth center. As you exhale see the light travel from the top of your head down through your body to the bottom of your feet. As you inhale see the energy travel from your feet up through your body up to the top of your head, the spirit center. This circulation should be persisted for at least seven minutes. See the energy cleanse and vitalize every part of your being and expand your awareness to cosmic consciousness.

Continue to repeat this technique each day you will begin to see and feel a change in your psychic awareness and a marked improvement in your health. Don’t become discouraged if you don’t achieve results immediately. This technique produces very positive effects but they are cumulative in nature.

An artificial elemental is useful for certain tasks:

Producing your own artificial elemental is fairly easy. You must assume that the act has produced results, even if you do not immediately observe them.

An artificial elemental is basically a thought form which has been strengthened with emotion. Refer to the aura color chart and decide what color to make the elemental. Then decide on a shape or outline.

A simple circle or cloud is a good place to start. With this in mind, you can use ritual to create your elemental. Creative visualization is good for this. Visualize it glowing before you.

Formal ritual usually involves the invocation (ritually calling up) of a god or goddess, spirit, or other entity. In this sense, magick is somewhat similar to pagan religion and witchcraft.

However, we consider magick ritual a technique, not a religion. Sometimes the invocation of an entity creates an artificial elemental.

Communicate with your elemental with telepathy by talking to it or with creative visualization. Your artificial elemental is closely linked to you and your subconscious attitudes. It will generally not do things you think it cannot do. Results relate to effort and belief.

Do not use artificial elementals for any kind of aversive magick at this point; they can be nasty little critters to get rid of. Should you have to eliminate one of them which you created in error, you must re-absorb it back into yourself through your will or in some cases, you can ‘exorcise’ it.

To know more you can buy the book at our store. http://xuanlong.org/product/old-wicthcraft-e-book-pdf/

Be the first to comment on "Magick Pentagram Revealed"