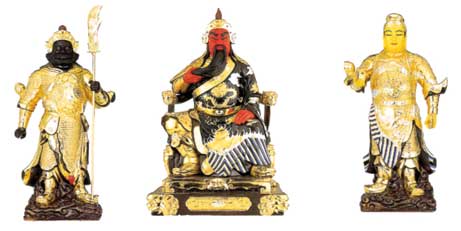 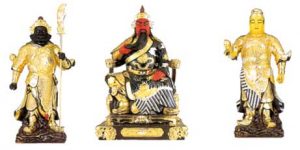 Guan Ti or Guan Yun Chang was born in Shan Xi province during the Three Kingdom (220 – 260 AD). He led a simple life and made his living as a young man by selling bean-curds, thus he is worship by bean-curd sellers as their patron god today. He has an excellent memory power that he had the ability to recite word for word the entire Classics after reading it for once.

Therefore students taking examinations usually pray to him to bless them success. He is also worshipped as the God of Literature by scholars. Some idols of Guan Ti can be found seated while holding a book.

He was known for his righteous, and justice which got Guan Yu into trouble when he interfered with a licentious and corrupt magistrate who forced a poor lady to become his concubine. The magistrate was slain by Guan Yu. He had to flee for his life and escape to the mountain to seek refuge. As he was on his journey to the neighboring province he stops by a stream to have a wash; when to his surprise he noticed a great changed in his appearance! His facial complexion had changed from pale white to reddish tint which saved him to disguise himself and was able to walk through the sentries who was guarding the mountain pass.

When he reached Chu-Chou of the Szechuan Province he is, befriends Zhang Fei and Liu Bei who shared his noble ideals and virtues. They took the oath of brotherhood in a peach orchard, and sworn as “brothers”. Chang Fei was a butcher, became the youngest brother. He was a man of a fiery temper who had an unyielding sense of justice and was well known for his immense appetite both for food and adventure. He had a black face which was full of whiskers and his formidable height of seven feet tall; very few would dare cross his path. His great love and loyalty to Guan Yu have won him a place of honor he is always seen standing beside Kuan Yu in all depictions.

Liu Bei, the elder brother who came from a distinguished but impoverished family with imperial linkage, was known to be a man of honor.  Guan Yu, a powerful figure of more than eight feet tall, possessed an enigmatic personality and integrity that won him the respect of all whom he met.

Together the three sworn brothers set out and became involved in military pursuits, They displayed great military prowess and fought many battles which are recorded in details in the famous novels of “The Three Kingdoms”.  Based on the recorded history of his life Guan Yu had many occasions display his nobility, uprightness, integrity, loyalty, and bravery. Despite living at a time of great distress and chaos during the Han Dynasty, he would never be tempted to acquire wealth, fame, and power as he remains faithful to his oath that he had taken with his brothers at the peach orchard; “ To be loyal to each other in life and united in death”.

In the year 219 A.D. he was captured by Sun Chuan and executed. It was recorded that on the night of his death, his spirit appeared before a Buddhist monk, to seek refuge to the Buddha dharma. Based on a Buddhist account, Guan Yu manifest before the Tripitaka Master Chi Tsai, the founder of Tien Tai Buddhism, with a retinue of spiritual beings. After receiving the teachings Guan Yu requested the Five precepts and took refuge in the Buddha dharma. He vowed that he would be a dharma protector to the Buddha Dharma. Hence, his idol is usually found in the hall of most Buddhist temples. He had earned his place in both the Taoist and Buddhist pantheon of deities.