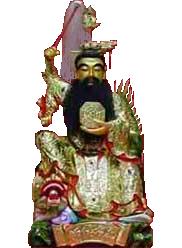 A renowned Taoist master during the Tang dynasty originates from ChangAn Province China. His actual name is Lee Shun Feng (李淳風). This Taoist Sect is also known as Shun Feng Tao (淳風道) named after the founder of this Sect. At a young age, he had learning disabilities, both his parents were very concern. They invited a Taoist master to view his physiognomy.

Physiognomy, which claims to find correspondences between bodily features and psychological characteristics, often makes use of such supposed similarities. The Taoist master revealed that based on the physiognomy of the child, his learning disabilities are only temporarily. He has the features of a great sage and shall lead living beings to salvation.

After the Taoist master gave the prediction, later at the age of six he can master all the Chinese classics, literature and even memorize every single word after reading once! He was so brilliant that not anyone can match him at that age. Due to his past karma or affinity with the Taoist master, he met him again at the age of twelve and requested the Taoist master to take him as a disciple. However, the Taoist master refused as he was told to fulfill his obligations to his parents. In China, we place great emphasis in filial piety and repaying the kindness of parents. The Taoist master promised him that when the time is ripe he shall appear again to offer him the discipleship. He didn’t have to wait long as both his parents deceased when he was nineteen years old.

He followed the Taoist Master and learned Taoist alchemy, spiritual cultivation, meditations, divination, and art of war. With the wisdom and power he possessed he begins helping numerous people, everywhere relieving them of their hardship and suffering. He was later canonized as a deity and the founder of Taoist sect Shun Feng Tao ( 淳 風 道 ).

Be the first to comment on "Liu Ren Xian Shi (六壬仙師 )"