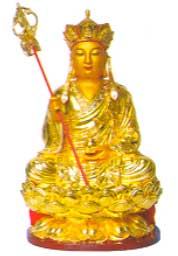 Di Zhang may be represented in sitting or standing posture. He always has a kind and benevolent feature and carries either, or both, his symbols of the Cintamani or “Wish-fulfilling Jewel’ and the “Ringed-Staff”, which is also called the Khakkhara. This ringed staff is often carried by Buddhist monks in their travels so that the sounds caused by the jingling rings can warn small animals and insects of their approach lest they tread upon and killed. It is also sometimes called the alarm-staff.

In the much-treasured picture of Di Zhang Pu Sa, which is found in many Buddhist homes and temples, he is seen seated upon a lotus throne. His hands hold the precious flaming pearl which has vast magical powers beyond description. He wears the robe of a Northern Buddhist monk and on his head is the “Five-leaves crown, where the representation of a Dhyani-Buddha can be seen on each of the leaves”.

Whenever you have the urge to pray to this Bodhisattva for any help, visualize him a few seconds as you silently recite, “NAMO DI ZHANG WANG PUSA”. Di Zhang Pu Sa is very responsive to sincere prayers of faith and he may yet grant you your wish if it is not too unselfish or unreasonable. All may pray to him with this simple invocation and, due to, your past karmic links with him may yet make you into another ardent Ti Tsang devotee again in this lifetime.

The standing posture of Di Zhang is particularly popular in Japan where he is known as Jizo Bosatsu. It represents the readiness of Jizo to respond immediately to the calls of help made by those who have faith in his saving powers. Standing upon a lotus, he holds his precious flaming jewel with his left hand while the ringed staff is held with the right, ever ready to force open the gates of Hell with the staff and to dispel the darkness of the infernal realm with his luminous gem.

Di Zhang is at times depicted accompanied by a dog, which also has a significant meaning. On the death of his mother, the Bodhisattva, not as “Sacred Girl’, hastened into the underworld with the view of comforting her and to seek favorable treatment for her. However, he could not find her but later discovered that she had already taken rebirth as a female dog. Upon his return to earth, Di Zhang soon traced and adopted the animal, which then became his companion on his pilgrimages.
Another popular depiction of him is in this standing or ‘activity-form’ which has his left hand holding an alms bowl against his navel, while his right-hand forms the mudra (hand-sign) of “giving consolation and peace to all living beings”.

Di Zhang Pu Sa has many emanations and he has manifested in countless forms to save beings at different times and places. In the Chinese Buddhist Pantheon, his is the only figure in the form of a monk. This is to indicate that Mahayana Buddhism is suitable for both the monks and the laity.
Di Zhang’s compassion is not practiced exclusively for the benefit of the beings of the hell realm, he also gives blessings to those of the world who seek his help and he is a comforter of the poor, oppressed, sick, hungry, and those who are troubled by spirits and nightmares. Those who have firm faith in him can easily receive his protection. With faith one needs to recite any of these simple prayers:
“NAMO DI ZHANG WANG P’USA’ or
“NAMO KSITIGARBHA BODHISATTVA”.

Images of the Buddhas and Bodhisattvas are recognized by the symbols that they are associated with. Each of these symbols has a particular meaning which most people are unaware of. For example, the KHAKKHARA, or Ringed Staff, which Di Zhang holds, is not only meant to warn small and crawling creatures of his approach so as to avoid stepping on them but also to inform people of his presence through the jingling caused by the rings. Often a traveling monk on a pilgrimage has to stop at homes to seek alms and since he does not wish to speak unnecessarily, he usually announces his arrival by shaking his sounding staff.

As a result of Di Zhang P’usa having made this promise to Sakyamuni Buddha: “I will fulfill your instructions to continue to relieve beings from their states of suffering and lead them to Salvation. I shall strive to work hard until the next Buddha, Maitreya Buddha, comes to the world “. He is also adored as the “Master of the Six Worlds of Desire,” thus there are depictions of him being surrounded by a Bodhisattva, an Asura, a Man, an Animal (horse or ox), a Preta, and a Demon holding a pitchfork, which symbolizes the six different forms he assumes in the six realms to save the beings there.

In Chapter 12: The Benefits of Seeing and Hearing of the Di Zhang Sutra, Sakyamuni Buddha gave this advice for the benefit of all human beings:
“Listen to me carefully and I shall tell you in detail. If virtuous ones of the future see the Ksitigarbha Bodhisattva’s image, hear the Ksitigarbha Sutra, recite this Sutra, make offerings to Ksitigrabha, pay homage to him, they will receive these benefits:

The birthday of Di Zhang Pu Sa falls on the 30th day of the 7th moon of the Chinese lunar calendar. All over the world, Buddhist temples offer prayers to Di Zhang Pu Sa during the 7th lunar month for the benefit of the dead.
Di Zhang’s popularity among the Chinese and Japanese Buddhists is second only to Kuan Shih Yin Pu Sa as he takes upon himself the fearful and difficult task of bringing relief and consolation to the suffering beings of hell.