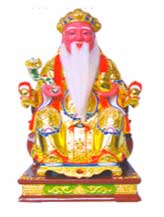 The great spirits of the earth possess great spiritual powers that not many spirits can match! Why! There are several aspects of the earth; it is wide and extensive, it supports and nourishes all living beings, it receives the great rain, it produces grass and trees, it holds all planted seeds, it produces medicines, it is impartial and it holds many treasures.

All the lands throughout the world receive his protection; all the grasses, woods, stones, sands, paddy fields, hemp, bamboo, reeds, grains, rice, gems, and oil come forth from the ground because of his power. He can even prevent plagues ghosts from spreading epidemics; furthermore, he’s the greatest wealth deity on earth! The image on the left is the sculpture of the great spirits of the earth. He’s always depicted as an elderly man with a white beard usually smiling and maintaining a benevolent expression. He holds an auspicious wish fulfilling object called “Ru Yi” 「如意」.While the other hand on the right holds several gold ingots.  He is also called “The Upright Spirit of Fortune and Wealth” (福德正神) when worshipped in temples and homes; while in a cemetery, he is called “Hou Tu” (后土)

Be the first to comment on "The Great Spirits of The Earth (福 德 正 神, Fu De Zheng Shen)"