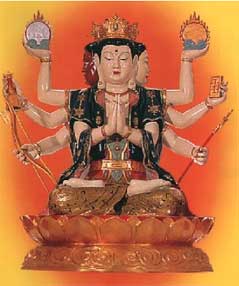 As told in the scriptures, Madame Zi Guang went to the imperial garden for sightseeing. She was captivated by the hot spring water next to the lotus pool and took a bath there, miraculously nine lotus buds appeared and after a while, the lotus blossomed and came out nine infants. After these nine children grown up, the eldest son Gou Cheng Xing ( 勾 城 星 ) became one of the heavenly gods, named North Star (Zi Wei Da Di, 紫 微 大 帝 ). The rest of the brothers were Tang Lang ( 貪 狼 ), Ju Men ( 巨门 ), Lu Cun ( 路存),  Wen Qu ( 文 曲 ), Lian Zhen         ( 廉 貞 ), Wu Qu ( 武 曲 ) and Po Jun ( 破 君 ) are the group of stars known as the Big Dipper Seven Stars.

There is another legend that states The King of Chou Yue, in the north, married her on hearing of her many virtues. They had nine sons. Yuan-Shih T’ien Jun        ( 元 始 天 君 ) came to earth to invite her, her husband, and nine sons to enjoy the delights of Heaven.

The Big Dipper Seven Stars are in charge of the fate of human and earthly fate in the universe. Every star controls the earthly fate for a period of 20 years. The division of 3 yuan and 9 yun (三 云 九 運 ) of Feng shui originated from this theory.

For those who offend the Grand Duke or Tai Sui ( 太 歲 ) for the year of the Dog 2006, should pray to Tai Sui. However there is another alternative besides praying to Tai Sui, you can also pray to Goddess of the Northern Star or Dou Mu to relieve you of any difficulty, danger and bad luck. Those affected signs are Ox, Ram, Dog, Rat, Dragon, and Monkey for this year 2006.

The reason is that the Goddess of the Northern Star is the mother of Nine Stars her power is inconceivable as she oversees the welfare of all beings.

She is depicted with 3 eyes on her forehead, 4 heads on shoulders, a head with 4 faces, 8 arms 2 palms clasp together, the other 6 arms holding a sun, moon, precious bell, bow and arrow, a seal of authority and halberd.  She bears a close resemblance to the Buddhist deity Marichi, Goddess of Dawn. Her features and the dharma implements she’s holding are almost identical.

Marichi, Goddess of the Dawn 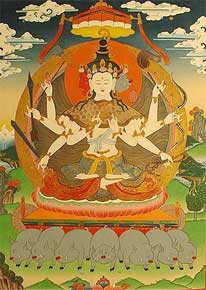 Marichi, (Tibetan Buddhism: o zer Chen ma, English: the One Having Light Rays), Goddess of the Dawn. Marichi is a red-colored female yidam associated with the sun and with the dawn.

Her mantra is traditionally used as protection by travelers. She has three faces, eight arms, and two legs. She holds the powerful Tantric tools (in her right hands) of vajra (at the heart in the mudra of teaching), the vajra ax, the arrow, the mudra of generosity (holding a sewing needle. In her left hand: the mudra of teaching holds the stem of a healing plant, a bow, a thread, and loop with hook drawn along by seven white boars.

The goddess Marichi is the manifestation of the twenty-one forms of Tara and has the special power to avert bandits, robbers, and thieves. She is a most sublime goddess who is the ally of beings who are bereft of companionship and support and who are subject to the coercion of others more powerful than they.

Be the first to comment on "Goddess of the Northern Star ( Dou Mu Yuan Jun, 斗 母 元 君 )"